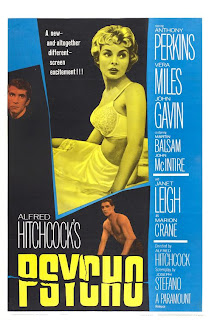 What strikes me as the most fascinating about PSYCHO is how I believe its director Alfred Hitchcock knew that one day, fifty years after its release, that movie would have become such an indelible part of pop culture that no one would ever look at horror films, shower scenes and sons damaged by overbearing mothers the same way again. PSYCHO is, at its core essence, an amazing, thrilling experience, one that never loses its power whether you are watching it for the first time or if you have already watched it too many times for your own good. This, however, creates a huge problem for me: how to select only one image as strikingly iconic enough to represent a whole two hours' worth of pure entertainment - and not going for the shower scene? 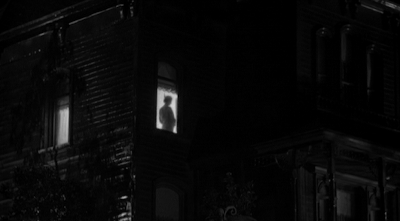 When we first see this woman by the window, in that creepy-looking manor next to Bates Motel, one can't help but wonder about the possible omnipresence it may have on the story development. The facial expression on Marion Crane (an immensely detailed performance by Janet Leigh), our protagonist, that has fled Phoenix with 40,000 $ she stole from her boss and in her way to Fairvale, to meet her lover Sam, after seeing that image is so curious, judgemental yet ambiguous, unaffected but scared, that I couldn't help but to be drawn to it. Hardly does she know she's only mere minutes away from being murdered in one of the most famous scenes in cinematic history; however, it's as if she knew that the woman she saw would spell trouble for her along the way. 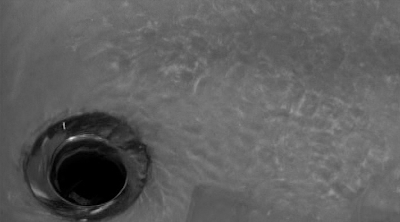 Speaking of murder... This is an impressive one. Misfortunately, Marion Crane meets her fate and ends her journey here. What a way to go. After a creepy, bizarre conversation with the motel owner, Norman Bates (an outstanding Anthony Perkins), Marion unknowingly decides to take a shower. The rest, you already know. Bernard Herrmann's delightfully suspenseful score sets the perfect mood for this untimely end. A shadow holding a knife creeps in. Marion screams loudly and  is repeatedly stabbed. In one last movement, she pulls the shower curtains. Symbolically, blood and water spin down the drain and the camera cuts to a close-up of Marion's unmoving eye. When Bates sees her, he (and we) can't help but to be sickened of the whole gruesome picture. 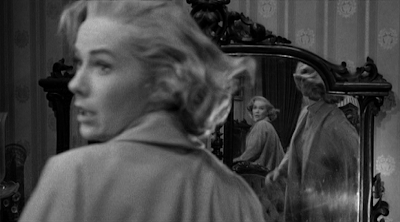 My favorite shot. After her disappearance has been known, a private detective, Arbogast (Martin Balsam) is hired to discover evidence on her whereabouts. He will eventually end up being murdered at the Bates's, not long after he informs her sister, Lila Crane (Vera Miles) and her lover Sam Loomis (John Garvin) that she stayed in that motel on her way to Fairvale. When they didn't hear from him the next few days, Lila and Sam decide to take matters into their own hands and search for her inside the house. Here lies what I believe to be Hitchcock's greatest skill: he worked with our primal fears and keeps testing them every time. It's amazing what frightening feelings he can pull off a car chase by a policeman (that repeated image of Marion looking into the rear mirror and afterwards of the policeman parked outside the used cars department reads as a pitch-perfect notion of human nature - when we do something bad, we are always glancing over our shoulders, almost anticipating that someone will come and be suspicious and reveal that they had known all along what we have done). This is why I love this shot so much. It plays so obvious that Lila would be terrified to see herself in the mirror, mistaking it for somebody else. In an ominous, creepy house like that and taking into account the purpose and the illegality of her presence there, who wouldn't be scared? It's something we all can relate to. Who hasn't been caught in a situation like that before? Who hasn't been caught sneaking up on something when we know we aren't supposed to? 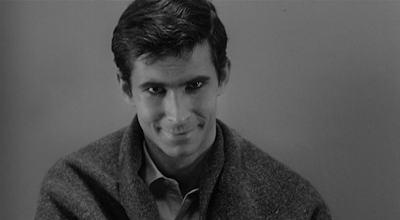 From the first moment when he appears on screen, it's pretty clear that in the end it would all come down to Norman Bates. Anthony Perkins plays him in excellent fashion, transforming a complex character on paper into a doubtful shadow of a person. He conveys that boyish, "joie de vivre" kind of personality perfectly while still managing to sound mysterious and creepy through his line reading of some pivotal sentences. And it's fantastic to see him let go of his grip when things start to get personal. He evades. He giggles nervously. He loses track of his speech. He is not to be trusted. To Hitchcock's credit, although I feel that he should have ended the movie right after the scene where the mother's identity is revealed, this last scene which ends with the imposition of a skeleton over Norman's face is absolutely brilliant (The psychiatrist's lecture? Not so much), as if to remind us that sometimes the devil is in the unlikeliest of places. Norman Bates had one gentle soul. He just happened to have a broken one. 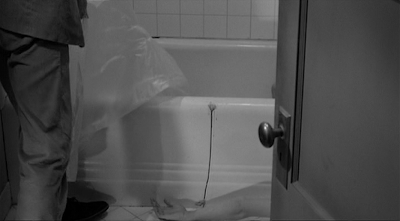 PSYCHO is an effective, full-blown melodrama, filled with interesting performances but where the director is the true star. From the close-ups from the character's point of view, the unsettling way of creating irony in a serious dialogue, the joyful thrill of having your characters smile in the most innapropriate of settings,  the spot-on art direction (stuffed birds, anyone?), casting choices (every actor is everything, physically, which the character requires them to be) and perfect editing, PSYCHO is truly an emblematic masterpiece, a mindblowing symphony of horror and suspense; in a sentence, it is everything the great movies hope for: a movie for the ages, that stands the test of time, that defies and challenges the audience, a movie that can proudly call itself one of the best ever made.
Nota Final:
A
Informação Adicional:
Realização: Alfred Hitchcock
Elenco: Janet Leigh, John Gavin, Vera Miles, Anthony Perkins
Fotografia: John L. Russell
Banda Sonora: Bernard Herrmann
Duração: 109 minutos
Ano: 1960
Trailer: