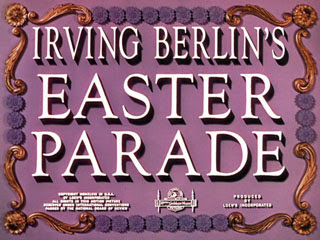 During the 1940s and 1950s, the musical genre was one of the most popular and on-demand kind of pictures that Hollywood could produce. Many great stars of that era got a start or an upwards push from appearing in one of these musicals and those were the movies that immortalized outstanding actors and actresses such as Judy Garland, Gene Kelly, Fred Astaire or Ginger Rogers. Unfortunately, given the immense quantity of musicals produced each year, back in the day, only a few of them found moderate success. Usually, the ones with these big stars would thrive. Such is the case of "EASTER PARADE", a musical with a slim and cliché'd narrative, with very little story to tell but one that is compensated by swoony and joyful song-and-dance numbers that survive because of the excellent pairing of Judy Garland and Fred Astaire.
It's fun to look back and remember that this pairing almost didn't happen. Gene Kelly was the actor first cast in the male lead role. However, a broken leg pave way to Fred Astaire, nominally retired at the time. He didn't know it then, but this musical would reignite his career at MGM. Judy Garland was the first and only choice to star in the movie, but her struggle with overwork, depression, alcoholism and addiction to prescription drugs - which led to an unsuccessful suicide attempt the year before - were destroying her. She barely recovered to film "Easter Parade", which would end up being her last film with MGM and one of the last movies of her career. Even Ann Miller got lucky, because her part was to be played by Cyd Charisse. Nevertheless, the actress tore a ligament on the rehearsals and had to be replaced. Miller's casting proved to be tremendously spot-on, as she is the true highlight of the movie. 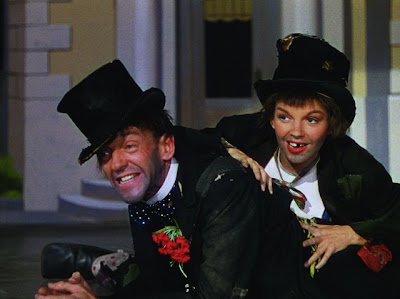 "EASTER PARADE" tells the story of Don Hewes (Fred Astaire), a theatre performer known for his extraordinary song-and-dance numbers alongside Nadine Hale (Ann Miller), who form the famous duo "Hale & Hewes". When Hale leaves to star in her own show in the Ziegfeld Follies, Hewes, in a spur of anger and drunkness, picks one of the dancers performing at a bar to be his next partner. The girl turns out to be the fantastic Hannah Brown (Judy Garland) and although their partnership in the beginning leaves much to be desired, after a while they start to become a huge hit. Moreover, despite loving each other, Hannah and Hewes try to maintain their relationship strictly professional. This is the simplistic plot behind "Easter Parade". It's a very straightforward story - Hannah loves Don; Don loves Nadine; Nadine loves Jonathan (Peter Lawford); Jonathan loves Hannah - until the story twists and the two big movie stars finally discover their true feelings for one another.
With old and new songs by Oscar winner Irving Berlin, "EASTER PARADE" is, even with all its flaws (its screenplay by Hackett and Goodrich, rewritten by Sheldon, is horrendous), one of the most entertaining, cheerful musicals I've seen and every scene with Garland and Astaire is bright and colourful. His dance moves are really spectacular (as exemplified in the "Drum Crazy" number) and her vibrato, soulful voice is always amazing ("Better Luck Next Time", y'all! Love it). Ann Miller was, for me, the true revelation from the movie. One of the issues I had with the movie was how someone could turn down this person who sings and dances beautifully (besides looking pretty as hell) in "Shaking the Blues Away" and prefer Judy Garland (and I love Judy Garland), so I have to ask: am I crazy to think this, especially given how badly Nadine treated Don? Probably. But Miller was nothing short of brilliant in her few scenes. 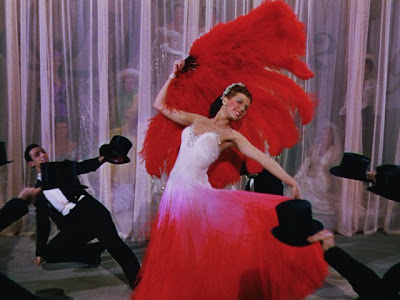 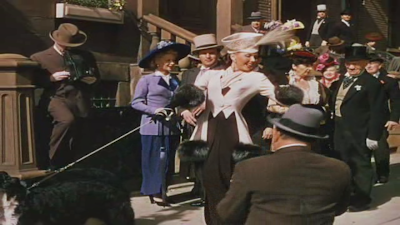 A Diva is a Diva, even in 1912.
It's sad that the movie is not more original; however, how can one complain when he's being entertained by Garland, Miller and Astaire's singing and dancing moves? One cannot, obviously.
As for Best Shot...
I had a hard time picking one single moment as it's not a very memorable movie. But seriously, how can you deny Judy Garland for this SINGLE MOMENT OF AWESOMENESS? 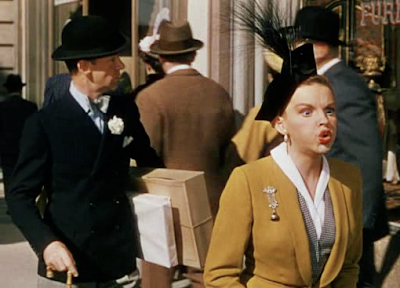 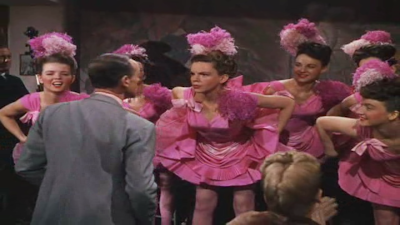 And this:
You're such a genius, woman!