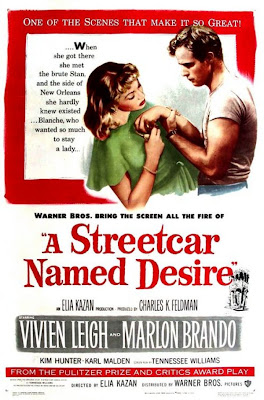 There is so much I love about A STREETCAR NAMED DESIRE that it makes it so hard to resume it to a mere few words. It's one of the greatest dramas ever. It's one of the greatest ensemble pieces of all time. It's an indelible cultural landmark of the 1950s, deemed too daring and unconventional for the time but looking far too restrained when watching it at present. It features a clash between two of the most amazing screen performers the cinema has ever seen: the Method acting enthusiast Marlon Brando, in one of his first outstanding film roles; and Old Hollywood queen and legend Vivien Leigh, which had already given us one of the most fascinating characters of movie history (I'm talking about Scarlett O'Hara, of course). Both turn in fabulous turns which would eventually lead to Academy Award nominations to both (actually, all four main actors were nominated, resulting in three wins; only Brando lost). 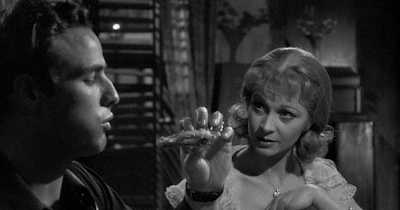 A STREETCAR NAMED DESIRE tells the story of Blanche DuBois, an aging southern belle who apparently arrives at New Orleans to visit her sister Stella, who is married to Stanley Kowalski, a rude, impolite, brutal man. During her stay at her sister's house, Blanche witnesses the abuse her sister puts up - which later she will also become a victim of - without a reaction from her part. Stella is clearly madly in love with him, or else she'd do something. Stanley goes on to torture poor Blanche to a state of unbearable madness, to a point where her only solution is to be institutionalized. 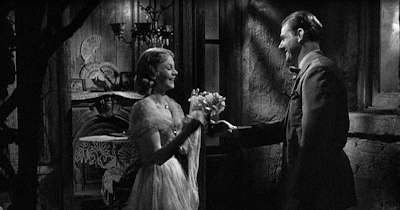 Tennessee Williams had a way with words for women. He manages to see through their façade and show us their raw vulnerability, suffering and pride. Blanche DuBois is a very flawed woman. Decadent and shameful, according to the people of Auriol. Narcissistic, hysteric, pompous and artificial, Blanche is one mighty creation for any actress to dare play the role. That Vivien Leigh could imprint so much faux glee (especially in her date with Stanley's friend Mitch (Karl Malden), who seemed to bring some fresh air into her life), so much neediness and urge and lust and balance it with charm, delicacy and grace while providing us a fine way to her pathos, to her pain is a true testament to her unique approach to characters. The play is set out to make us feel sorry for her and her sister; yet, Leigh manages to convey feelings in Blanche that never allow us to identify ourselves and sympathize too much to her story, allowing us to see why Stanley (Brando) had such huge issues with her. She annoyed the hell out of me in some scenes - and in others she was endearing. A great performance by all means. 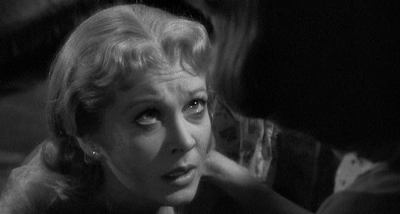 Marlon Brando is also firing in all cilinders. Stanley Kowalski is an atrocious man, that is for sure. He spanks his wife, he screams and yells, he smashes things, he gets into fights with his friends and he mentally and physically tortures his sister-in-law. His character is so real, so violent, so difficult to read that is makes it so delicious to wonder how he'll react next. The scene where he is left alone at his house, drunk, crying after spanking his wife, is heartwrenching. He makes us feel for the character in a situation where that shouldn't even be considered possible; after all, he had just spanked his wife. 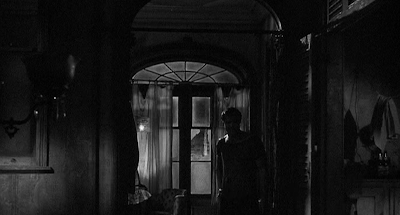 Interestingly, the surprising element of this story is the third party of the triangle: Kim Hunter's Stella. She's so hard to figure out. Why she's still with Stanley, when everyone in her neighbourhood knows how he is? How does she put up with so much nonsense from her sister? Hunter makes Stella enigmatic, emotive, reactive, her face illuminating in several frames. She behaves naively most of the time but there's a sort of absent-mindedness, perilessness in the character that fascinates me. It's obvious in the beginning, when Stella leaves her house once again, that she will probably return; she lusts for Stanley and can't seem to live without him, no matter how abusive he is. She doesn't fear him; she even understands him. All this only makes the final scene more intense - when she finally realizes what he has done to her sister and leaves - will it be for good? 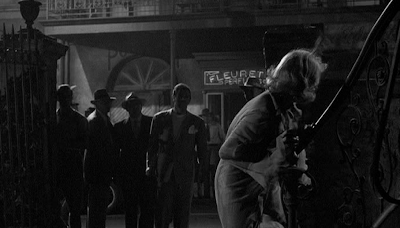 My choice for best shot. I think it perfectly captures the nature and three-way dimension of this triangle of relationships. Stanley abusing Blanche. Blanche leaning on Stella. Stella trying to be a moderator between this feud, opting to never choose sides. 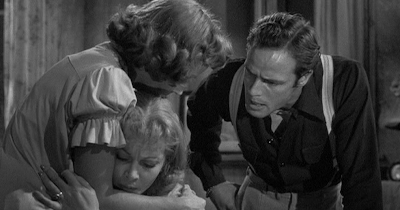