Best Shot: How To Marry a Millionaire

This post marks our blog's return to participating in Nathaniel Rogers' thrilling series "Hit Me With Your Best Shot". I was very sad that I wasn't able to participate last week, in which the series focused on Wes Anderson's "The Royal Tenenbaums", one of my personal favorites, so this week I knew I couldn't miss.
The movie being showcased is "HOW TO MARRY A MILLIONAIRE", a deity from the 1950s with three huge stars and box office draws of the time, Betty Grable, Lauren Bacall and the one-and-only Marilyn Monroe. This romantic comedy, though amusing and clever at times, is too simple and too plain to leave me with a lasting impression. Luckily, the movie itself wasn't the important part: the three actresses were.
Of the three, I found Lauren Baccall's Shatze the most inspired character, the more fleshed-out, while Marilyn Monroe's is by far the weakest in terms of service to the plot. Nevertheless, Monroe never fails to impress, substantially elevating the material with her great comic timing and her dim-witted appearance (she looks like a modern hipster trying to pass as cool with those crazy-ass glasses). Betty Grable was just fine. The man they date are far less interesting and therefore, for me, don't even merit any commentary. 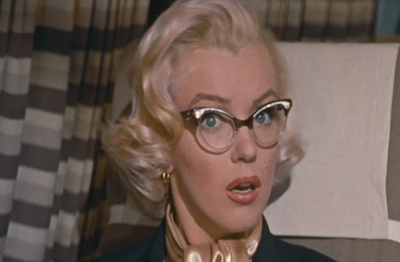 Look at hipster Marilyn (if this were today, this would be an instant Internet meme like 'hipster Ariel')
There were three moments that stuck with me:
1. Lauren Bacall's expression of superiority and despisement (that eyeroll! that false look of concern!) when she's informed by her two friends of their mission's failure, marrying poor, humble men:

2. Marilyn Monroe (not wearing glasses and thus blind as a bat) at first mistaking the maitre d' for another man and then bumping into him unknowingly:

3. And my best shot: in a moment of total awesomeness, Lauren Bacall, who spends the entire movie behaving like a rich, snotty bitch, gives in and is seen eating a plain, greasy burger. And still giving a face like it's SO beneath her. Classic diva / moment of bitchery. 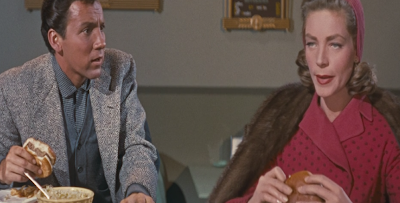 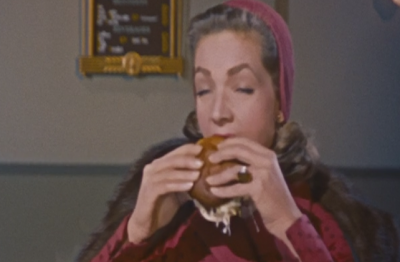 I may be poor as hell but I'm not going down without dignity. He's still WAY out of my league. No tie, how dares he!
The movie doesn't hold up very well today (many jokes and situations feel very time-appropriate) but the actresses are still a delight.  As for this series from Nathaniel? It's a blessing that keeps on giving. I hope he never stops doing this.