An Ode to one of the most amazing villains ever

Este artigo faz parte da minha participação na rubrica do The Film Experience Blog de Nathaniel Rogers, "Hit Me With Your Best Shot", na qual é-nos requerido escolhermos uma imagem icónica do filme em discussão nessa semana e justificar a nossa opinião. Fazemos sempre um duplo artigo, bilingue, com a versão inglesa em primeiro lugar e a tradução no português logo de seguida. O filme desta semana: SNOW WHITE AND THE SEVEN DWARVES (1937), "O" clássico que basicamente define o legado de Walt Disney.
It had been more than ten years since I last watched "Snow White and the Seven Dwarves". When I popped the DVD into the DVD player, I assumed I'd be enchanted, sure, that I'd find this an hour and a half properly charming and delightful like I always do whenever I watch an old Disney movie, but it never occurred in my mind that I would end up liking the movie more than I used to like it back when I was a kid. Granted, I'm not - and I never was - this movie's target audience, given than it's a very feminine movie, a typically girly fairytale but still... It was so much fun! I especially didn't remember how clever and amusing Grumpy and the Evil Queen were!  The only thing that I remember that was the same as it ever was: Snow White and Prince Charming are total duds. Seriously. Nothing to cheer for there.

Nevertheless, the movie more than makes up for our investment in the story of Snow White, a beautiful princess whose father and mother passed away and whose stepmother is an evil hag who happens to have both ravishing beauty (on which she takes the greatest pride) and a terrible hatred towards Snow White (who becomes her stepmother's maid), because she fears one day she'll ask her Magic Mirror who's the fairest of them all and the Mirror will gladly tell her than her beauty has been surpassed by Snow White's. And so, evidently, one day that happens, the Evil Queen loses it and tells her Huntsman to kill the princess. As every single person in the universe knows, the Huntsman can't do it, Snow White runs into the woods and finds a new home with the Seven Dwarves. Evil Queen finds out, gets even crazier and in a deliciously wicked twist of events, decides to desguise herself as a peddler and hand Snow White a poisoned apple. I don't think you need further information on the plot since I'm sure everyone knows how this ends. "Someday my prince will come", et cetera, et cetera... It's a Disney fairytale after all. 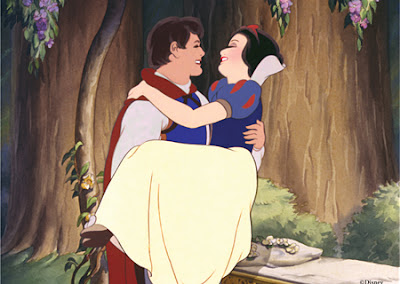 Despite the story being this simple and, let's face it, kind of boring, Walt Disney and his fantastic group of animators worked wonders to enliven and improve the audience's experience. Smart choices like naming the Dwarves according to individual characteristics, making physical comedy with animals look easy, and even more than that, enormously funny and, most of all, creating a beautiful world which looks realistic and at the same time swoony and dreamy, which for an animated motion picture in 1937 that asks us to believe in fairytales, is in itself a gigantic feat.
But Walt Disney didn't stop there. Nope. He created, within this movie, two of the most colourful, campy and larger-than-life characters that Disney has in their universe. I'm talking, of course, about Grumpy and the Evil Queen. Two big divas, with two giant egos and with brilliant, acerbic wit. 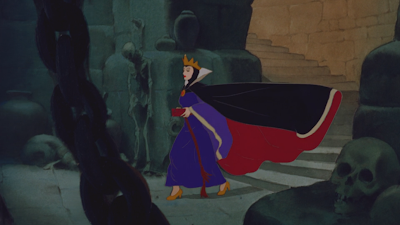 Like a boss.
The Evil Queen in particular is a fascinating character. Her line delivery is remarkable. Her face is magnificently evil. And her voice, icy and powerful, could slice a person in half. I love that Disney embraced how stereotypical and broad this character should be and allowed such a character to exist in a movie made for kids. The Evil Queen, as her name tells it, is supposed to be EVIL. And Evil she is. And bitchy. And harsh. And fierce. And the most pleasant thing of all: she flaunts it like a pro. She's cool and she knows it. 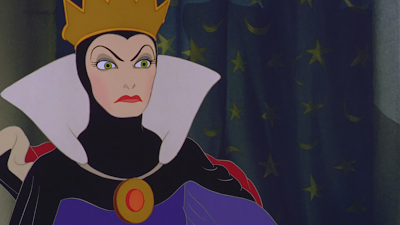 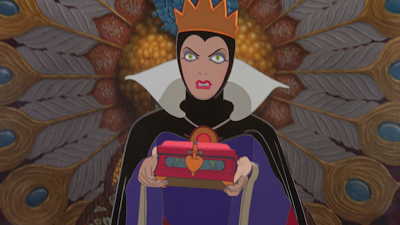 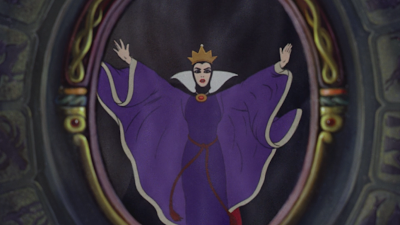 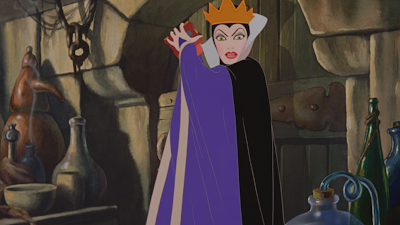 She gives THE BEST bitchfaces!
My best shot:
In that awesome sequence in which the Evil Queen brews the potion that'll allow her to transform her appearance to look like an old lady (full of genius moments, take a bow Walt Disney!), the Evil Queen puts together an absurdly amusing list of ingredients ("an old hag's cackle", "a scream of fright") and then she delivers the ultimate punchline:
"A thunderbolt. To... mix it well". 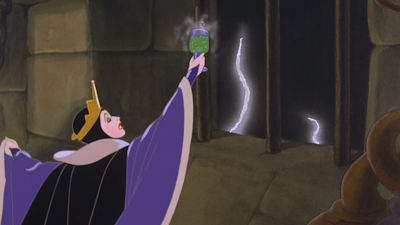 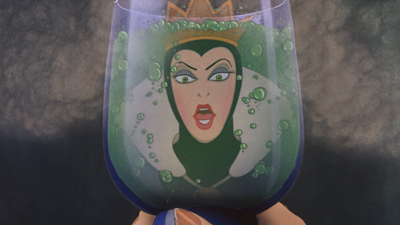